Skip to content
Free Shipping On Orders Over $69.99
Search

Plant JYM will Blow You Away

I never had any interest in a plant protein powder… until I tried Plant JYM. Now I can’t get enough of it.

I’m not a vegan or a vegetarian. I’m a meat-eater and I love dairy. Why the hell would I want to get my protein from plants? What I would come to learn from Dr. Stoppani is that pea and rice are high-quality sources of protein. And what they lack naturally in terms of amino acids (making them not “complete”) is a simple matter of adding BCAAs and other essential amino acids like methionine and lysine. And just like that, you have a plant protein powder that’s every bit as anabolic as Pro JYM.

I was wrong. I tried Chocolate Hazelnut Plant JYM and it was amazing – right up there with my favorite chocolate Pro JYM flavors (Chocolate Mousse and Chocolate Cookie Crunch). I was happy to stick with that, but then Justin Kamb told me I had to try Oatmeal Cookie. Okay, whatever, but no way I would like that better than Chocolate Hazelnut.

Again, wrong. Holy s#!* – Plant JYM Oatmeal Cookie takes the cake. I can’t stop drinking (or eating) it now. I have Oatmeal Cookie Plant JYM after workouts, I have it for dessert, I put it in both my overnight oats and my hot oatmeal.

I thought there was no way Plant JYM would taste as good as Pro JYM, but I think it might even be better. Don’t get me wrong, I still love Pro JYM and have at least one scoop a day because I like the thought of having “diversity” in my protein intake – a protein blend, a plant protein, a whey protein isolate (Iso JYM). But I’m hooked on Plant JYM. The taste, the texture, the thickness. Amazing.

When people come over to my house, I’ll have them try a scoop of Plant JYM. The most common response I get is, “Damn, that’s good.” They can’t believe it’s plant protein. Tastes more like a straight-up milk shake.

If you think a plant protein isn’t for you because you like meat and dairy, or that you think it won’t taste good… reconsider. I still eat meat and dairy, and I still drink both Pro JYM and Iso JYM all the time, but Plant JYM is my go-to protein right now. 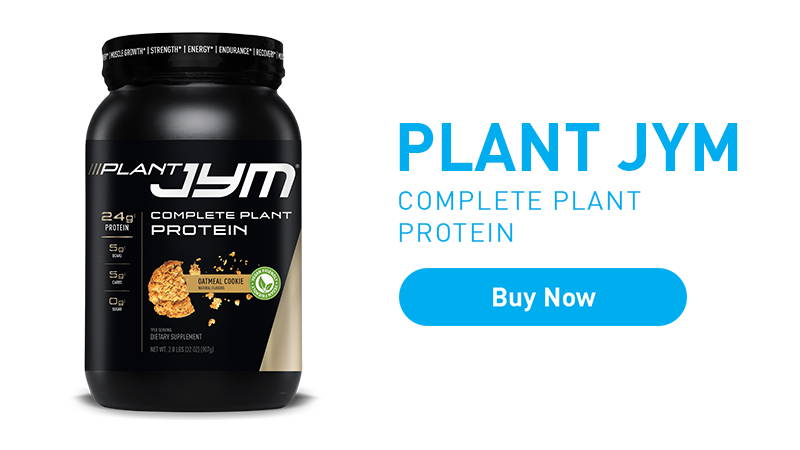